Week 5: The Way Up is the Way Down 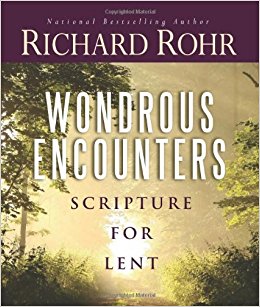 In our final week of Wondrous Encounters by Richard Rohr, we’re contemplating the beautiful early Christian hymn found in Philippians 2. This is a good passage to ponder at the beginning of Holy Week because it lets us see the mind of Christ—the mind that chose to embrace death for our sake.

In many ways, the mind of Christ is not like our mind at all. Rohr writes:

God . . . has chosen to descend—in almost total counterpoint with our humanity that is always trying to climb, achieve, perform, and prove itself. He invites us to reverse the process too.

The hymn says that Jesus leaves the ascent to God, in God’s way, and in God’s time. What freedom! And it happens, better than any could have expected. “And because of this, God lifted him up, and gave him the name above all other names.” We call it resurrection or ascension. . . Who would have presumed that the way up could be the way down? It is, as Paul says, “the Secret Mystery.”

God draws us into Christ’s ascent, Christ’s mind, and this gives us freedom:

Trust the down, and God will take care of the up. This leaves humanity in solidarity with the life cycle, but also with one another, with no need to create success stories for itself . . . Humanity in Jesus is free to be human and soulful instead of any false climbing into “Spirit.” This was supposed to change everything, and it still will.

Your mind must be the same as Christ’s. Though he was in the form of God, he did not deem equality with God as something to be clung to. Instead he emptied himself, and became like a slave, and was born in the likeness of humanity . . . obediently accepting even death. — Philippians 2:5-7

May the way up be the way down for you this Holy Week.

Get New Posts Via Email

Sign up to receive new posts in your inbox.

We don't run ads or sponsored posts, but this site is still a lot of work. Can you chip in a few bucks to help out?